After months of training for the Vineyard 70.3 triathlon, the weekend of the race was finally here! I was slightly nervous, but mostly excited to test my training against the course and the other competitors. I took the ferry from Woods Hole to the Vineyard Saturday afternoon, had a carb-y dinner with my friend Jordan who was also competing, and got to sleep very early. Up at 5:30 on Sunday and ready to race!

The morning was cold and windy – whitecaps lapped against the beach as the sun came up. Shortly after 7:00 the race started and we were off! The swim was tough – the choppy water made it hard to sight and it took me a few minutes to get settled into a comfortable rhythm. The bike section was much better, I passed a ton of people while maintaining a reasonable level of effort. Finally, it was time to run and I was still feeling strong. I kept passing people while only being passed by a one person (who went on to take first place for the women, so I’m not even mad). I really had to push through the pain in the last few miles, especially running along the beach in a headwind.

When I crossed the line I was shocked at my time  – 5:15! I thought 6 hours was a realistic goal for the race… I blew that out of the water! I ended up placing 4th overall and 1st in the 20-24 age group. I was thrilled with the results and enjoyed a persistent runner’s high for a while after crossing the line.

Here’s a race report about what I did well and what I can improve on for future races.
Swim: 29 min. Course was short, garmin showed it as 1600yd
Bike: 2:53 (19.3 mph)
Run: 1:49 (8:23min/mi)
Total: 5:15
What I did well: Biked hard but didn’t overdo it. Hydrated and ate frequently and regularly. Ran at a consistent pace and pushed through a crushing mile 10-12 with a headwind. Transitions were smooth, especially T2.
To improve: Swim – more time in the pool, ocean swims in choppy water would have made a difference in the time. I was in the bottom half of swim finishers. I’m on a Specialized Allez roadie I bought used and also commute on. I think the move to a tri bike would make a big improvement.
Training: Averaged 8-10 hours a week for the past 5 months. Typically 1 swim/wk. Two week vacation at start of August with only 4 runs for workouts.

What’s next? Not sure. For now some R&R and big meals will do me well. I’m considering pursuing triathlon seriously depending on where I end up for grad school, but that remains to be seen. A huge thanks to everyone who supported me taining for this race, especially my parents who came to the Vineyard and cheered me on! 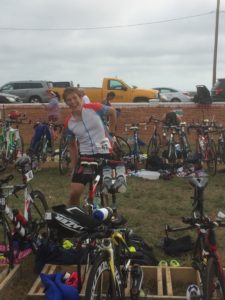 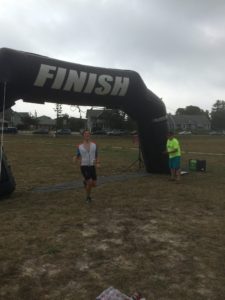 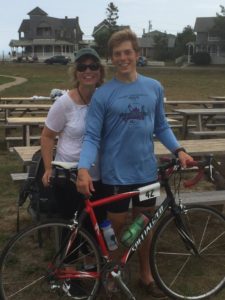