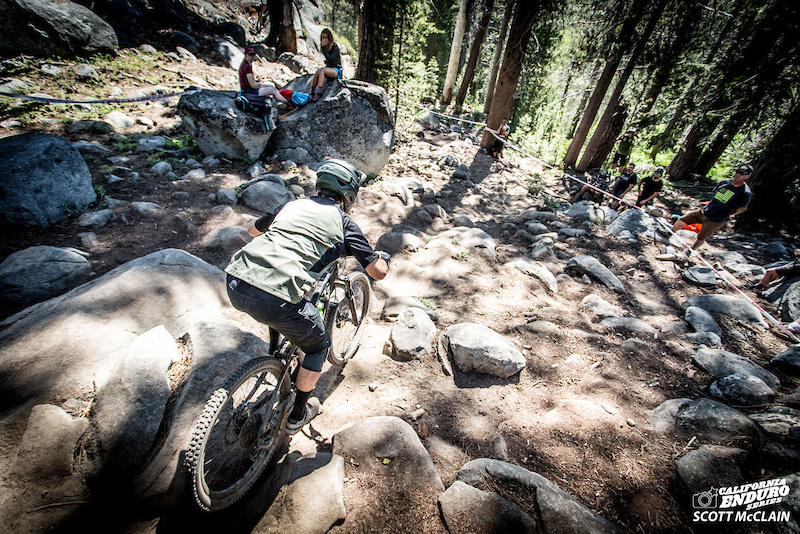 I raced the China Peak Enduro mountain bike race last weekend with Nick, Catherine, Peter Bai and Kate (visiting MTB rider from MIT who casually placed 3rd in PRO women). We all survived and even managed to have a good time! I placed toward the bottom of the pack in the sport category, but I’m going to blame it on a flat forcing me to run with my bike though the second half of stage 3.

If you’ve never seen an enduro race and want some context for the stage 3 rock garden I mention, check out this video. We’re talking mandatory hucks off rock drops and sandy blown-out corners wherever you look. It’s both a mental and physical game – the course gets easier the more momentum you carry through the features, but that is so much easier said than done. The China Peak Enduro consisted of 5 timed downhill segments, with pedal or ski lift transfers between them. I raced in the sport category, so I only did stages 1-4. Friday was a practice day where we sessioned the hard segments and tried to pick out the right lines. The race then began early on Saturday morning.

Stage 1: We had a long (45-60min) but easy pedal to the top of China Peak for the start of stage 1. This downhill section was flowey and fun. You had to trust the blown-out, sandy berms that they would hold you as you whipped around them, and be ready to put a foot out when they didn’t. There was one part of this stage that was an absolute mud pit. You had to stay on the slippery bridge or risk putting your bike into a foot of mud!
Time: 0:05:18 Position after this stage: 16/23

Easy pedal up to the top of stage 2.

Stage 2: Another easier, flow stage with a few rocky sections. The most challenging part was the bottom few corners that were basically sand pits with large rocks in them. How people took these at speed, I have no idea. There was no support for your tires. Your best bet was to dive in from the high line and try to slide your back wheel around.
Time: 0:06:00 Position after this stage: 14/23

Chair lift ride to the top of stage 3.

Stage 3: This stage was broken up into 4 sections: A rocky and fast section first, a pedal heavy middle, the rock garden (perhaps the hardest single feature of the whole day), and a pedal heavy end. Nick and I spent a while in practice trying to pick out the best lines through the rock garden, but I still hadn’t ridden it clean. I was nervous about this section, but hoped the race day adrenaline would carry me though. By this time I was warmed up and riding well – the top of stage 3 flew by and I was charging off the rock drops.
A few hundred feet before the dreaded rock garden, I hit something sharp and cut a slash in my front tire. In a few seconds my pressure and sealant was gone – I knew this wasn’t a trailside repair. I made the decision to run the rest of the course as fast as possible. The other option was putting in a tube, which would have cost more time in the end I think. So up on the shoulder the 30lb MTB goes, and I start hopping down the rock garden (cue massive heckling from the onlookers). I was passed by a few riders from behind before the finish. Secretly relieved I didn’t break myself on the rock garden? Maybe.

Chair lift ride to the top of stage 4.

Stage 4: Long, steep rock slabs was the theme of this stage. Try and maintain good bike position while dropping off of boulders… I was surprised how quickly my upper body tired out. You might not consider a 9 minute stage an endurance event, but I was feeling beat. I put down a respectable time on this stage, even managing to pass the guy in front of me. Sadly, it wasn’t enough to make up for the several minutes I lost on stage 3. On the flat sprint to the finish, I managed to snap my chain! My bike is in need of some serious love after the weekend.
Time: 0:08:58 Final position: 21/23

Overall, I had a great time racing and camping with the Stanford crew, and got to work on my skills a lot at China Peak. This is my first proper downhill event of the season, so I know I have a lot to work on. We’re racing the Mt. Shasta Enduro in a week and a half, so that will be the next test!