Each year, the International Society for Computational Biology Student Council (ISCB-SC) organizes a conference for students and early career scientists in computational biology. The Student Council Symposium (SCS) is typically the day before the Intelligent Systems for Molecular Biology conference and welcomes scientists from all over the world. As one of the organizers of SCS this year, I had to be in Prague to administer the conference and deal with last-minute . Check out these links if you’re interested in the Student Council (twitter), or want to read some writing I’ve done on planning an international conference in the past.

We had 3 excellent keynotes this year: 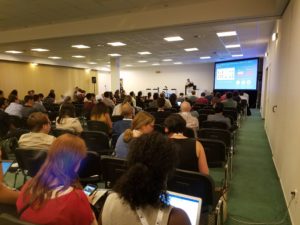 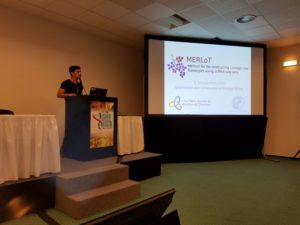 This was also the largest SCS I’ve ever attended or organized — we had 75 poster presentations and even more people registered for the symposium! I enjoyed helping to organize an event that brought people from such diverse and far-reaching backgrounds together. A lot of time and effort goes into SCS, but it’s rewarding and worth it in the end.

Finally, we moved the crowd to a nearby restaurant and bar for the “networking event,” which is a chance to let off some steam and enjoy a good meal while avoiding the topic of research entirely. It was great fun, even if Bart did hog all the beer!

A huge thanks to the other SCS organizers, it takes a big team effort to pull off an event like this: Julien Fumey, Mehedi Hassan, Bart Cuypers, Aishwarya Alex Namasivayam, Nazeefa Fatima, Alexander Monzon, Farzana Rahman, Sayane Shome, Dan DeBlasio, R. Gonzalo Parra and Alex Salazar all made invaluable contributions and were a pleasure to work with.