With 11 days left to go before move-in at Stanford, I had only just made it to California. There was still so much to see! I headed down to the Bay to see some friends in Oakland (and for a much needed shower!) and then out to the coast. Route 1 was still closed south of Big Sur, so I stopped for two nights in Pfeiffer Big Sur State Park to explore the surrounding trails and beaches. 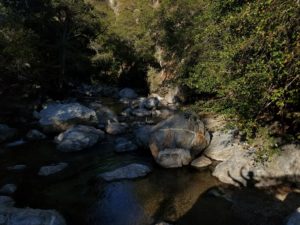 Climbing boulders in the Big Sur River. See the shadow at the bottom?

Another great stop was in Santa Cruz, home of the well-known Santa Cruz bike company. They let you take out a top of the line demo bike for $20, which is a steal for a whole day of riding. I rented a Tallboy 29er and was blown away with how it felt compared to my Specialized hardtail I had been riding all summer. Dual suspension, hydraulic disk breaks, 1x gearing, tubeless tires and a riser seat post made the climbs a breeze and rocky descents feel like smooth pavement. I was sold. Now to scare up another $3k for a new bike… 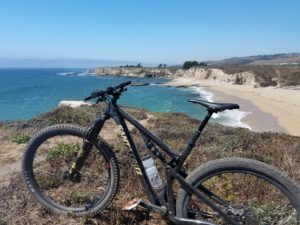 Great views with the Santa Cruz.

I stayed with some friends in Newport Beach and spent the weekend surfing and soaking up the SoCal sun. Afterwards, it was back into the wilderness for a short two-day bikepacking trip in Big Bear, CA. The environment here was much closer to a desert, and I learned that tires seem to magically attract cactus needles. I was limping along on patched tubes by the time I got back to the car.

In the morning, I was cooking breakfast by a river and minding my own business. Off in the distance I heard some rustling in the bushes and tensed up. Silence for a minute, and then I spotted a bear investigating the smells from my camp! Luckily he scared off when I started clapping and shouting. Having asserted my dominance over this section of the river, I thought I was safe to continue my breakfast. But no! A second, different bear also decided it was time to say hi! This one got much closer before I heard it, and have me quite a scare when it popped its head over the riverbank. I promptly packed up and left the bears to their spot after the second encounter. 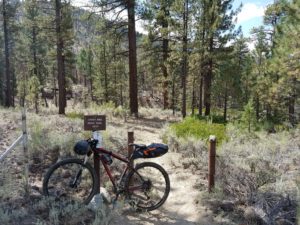 Departing for a night out in Big Bear. I was much better at packing this time around! 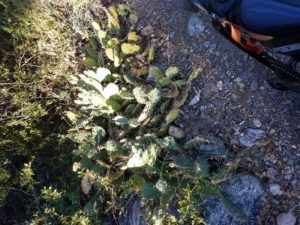 Cacti and flats became a theme of this trip. 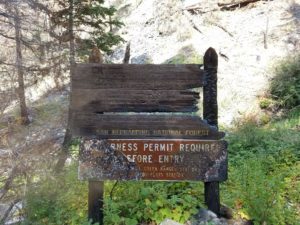