I woke up to sunrise in the Badlands. The landscape here is amazing – rolling prairie fields, towering mesas and sedimentary mountain peaks surround you. I spent a while looking around in the early morning light. 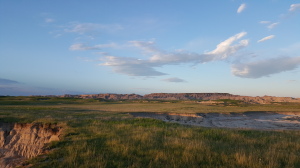 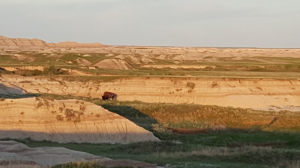 That second photo is of a bison surprisingly close to our camp. Definitely not the last one we would see today. After breakfast, we spent a while with the map and compass trying to figure out where we had wandered to camp last night. “Is it declination West, compass best? Or the other way around?” 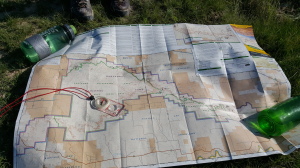 We planned a route to explore the landscape and set off into the desert. We trekked through canyons, explored cliffs and navigated through river beds for most of the day. 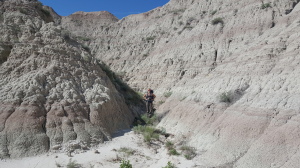 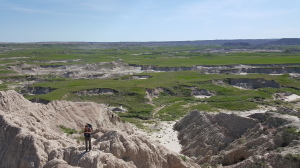 (Angela, are you texting in the backcountry?!)

At one point, we climbed a small hill and came upon a bison a little too close for comfort. We froze and watched as he stared back. Soon, the two bison (one was hidden behind the rocks) charged off to our right. These creatures can weigh almost two tons. It was an exciting, slightly terrifying experience watching the raw power they possess. 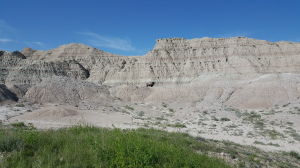 By 1pm, the sun and hot temperatures were almost too much to bare, so we headed back to camp for some shade and lunch. Much to our surprise, there was a bison hanging out by our camp! When he didn’t move after an hour, I sneakily grabbed our tents and we found a new spot to spend the night. Much of the rest of the afternoon was spent lounging around, reading, and napping – the sun was just too hot.

A small storm rolled in after dinner, but passed quickly. If you look carefully, there’s a bison at the end of the rainbow!

I fell asleep at 9, but by 10:30 another storm was raging outside. I spent the next hour and half sitting in my tent, holding the poles up so the wind didn’t blow it on top of me. Outside, lightning raged and the wind howled. Angela’s tent eventually collapsed, forcing us to relocate to a more sheltered spot. Morning finally came, and we hiked out to the cars.

Badlands was the most inhospitable environment I’ve ever stayed in. Simply maintaining a camp there was a constant battle against
1) High temperatures and constant sun. It’s impossible to get anything done in the afternoon hours, and there aren’t any shady spots you can retire to.
2) Exposure to storms and lightning. It’s hard to find a camp that’s protected from wind and lightning. Staying our there through a storm was honestly frightening.
3) No potable water. There are some rivers in the territory, but the water isn’t safe to drink even after filtering or treating. This means you have to bring a ton of water (see point 1), and even so, I was definitely dehydrated by the time we left.
4) Bison. They will charge and gore you if you’re not careful, and it’s easy to surprise them in this landscape.
5) Mosquitoes. They make everything about just existing in this environment more difficult. By the time I left, the back of my legs were covered in a hundred bites each – no kidding.

I learned a lot about staying in harsh environments after two nights in the Badlands. I was definitely not sad when we got back to the car and on the road again, though!