Lizzy left from LAX, and I’m on my own for the next week and a half until I get back to the East Coast.

Just my luck, because soon after leaving California, the Saab broke down! I was stuck on the side of the road in the 110˚ degree heat with a car that would not start. 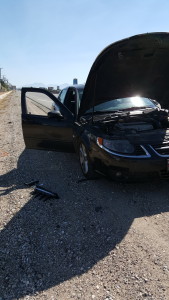 A bit of backstory: Saab cars have had a direct ignition module (that sits on top of the spark plugs and replaces the distributor in traditional ignition systems) since the 1980’s. The DI system increases efficiency and is supposed to work better with turbocharged cars. All good things, except for when they fail! The DI module had already failed on this car once before, so I was prepared…

I pulled the spare DI out of my trunk (drive a Saab long enough, and you’ll always have one of those in the boot), undid the 4 torx screws and swapped it out. It started right up without issue! The spare thew a check engine light (it was loaned from a friend and not 100% functional, I ended up getting a brand new part in Denver), but I tightened the bolts and was on my way soon enough. Total time for repair: 10 minutes.

My next major stops were Zion and Bryce Canyon National Parks in Southern Utah. I was excited to get back out in the wilderness after spending several days in California cities.