Big questions in the microbiome field surround the topic of microbiome acquisition. Where do we get our first microbes from? What determines the microbes that colonize our guts form birth, and how do they change over time? What short and long term impacts do these microbes have on the immune system, allergies or diseases? What impact do delivery mode and breastfeeding have on the infant microbiome? 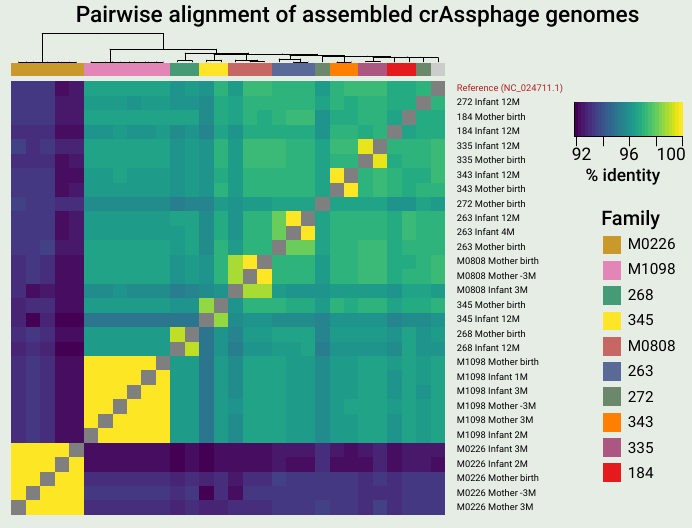 As you might expect, a major source for microbes colonizing the infant gut is immediate family members, and the mother is thought to be the major source. Thanks to foundational studies by Bäckhed, Feretti, Yassour and others (references below), we now know that infants often acquire the primary bacterial strain from the mother’s microbiome. These microbes can have beneficial capabilities for the infant, such as the ability to digest human milk oligosaccharides, a key source of nutrients in breast milk.

The microbiome isn’t just bacteria – phages (along with fungi and archaea to a smaller extent) play key roles. Phages are viruses that predate on bacteria, depleting certain populations and exchanging genes among the bacteria they infect. Interestingly, phages were previously shown to display different inheritance patterns than bacteria, remaining individual-specific between family members and even twins (Reyes et al. 2010). CrAss-like phages are the most prevalent and abundant group of phages colonizing the human gut, and our lab was interested in the inheritance patterns of these phages.

We examined publicly available shotgun gut metagenomic datasets from two studies (Yassour et al. 2018, Bäckhed et al. 2015), containing 134 mother-infant pairs sampled extensively through the first year of life. In contrast to what has been observed for other members of the gut virome, we observed many putative transmission events of a crAss-like phage from mother to infant. The key takeaways from our research are summarized below. You can also refer my poster from the Cold Spring Harbor Microbiome meeting for the figures supporting these points. We hope to have a new preprint (and hopefully a publication) on this research out soon!