Monday, Lauren and I were up early the next morning for a full day in Istanbul’s old city. We caught a boat from a terminal near Selen’s house and rode it all the way down the Bosphorus. Getting around by boat is common and efficient here. The terminal runs just like a metro stop – swipe your Istanbulkart to get in – and we noticed many local commuters boarding at stops from both the European and Asian sides of the Bosphorus. 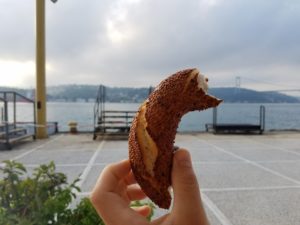 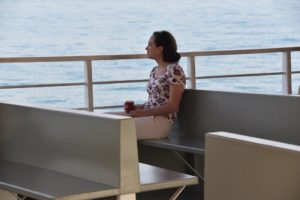 I caught Lauren having tea and contemplating the spirit of travel 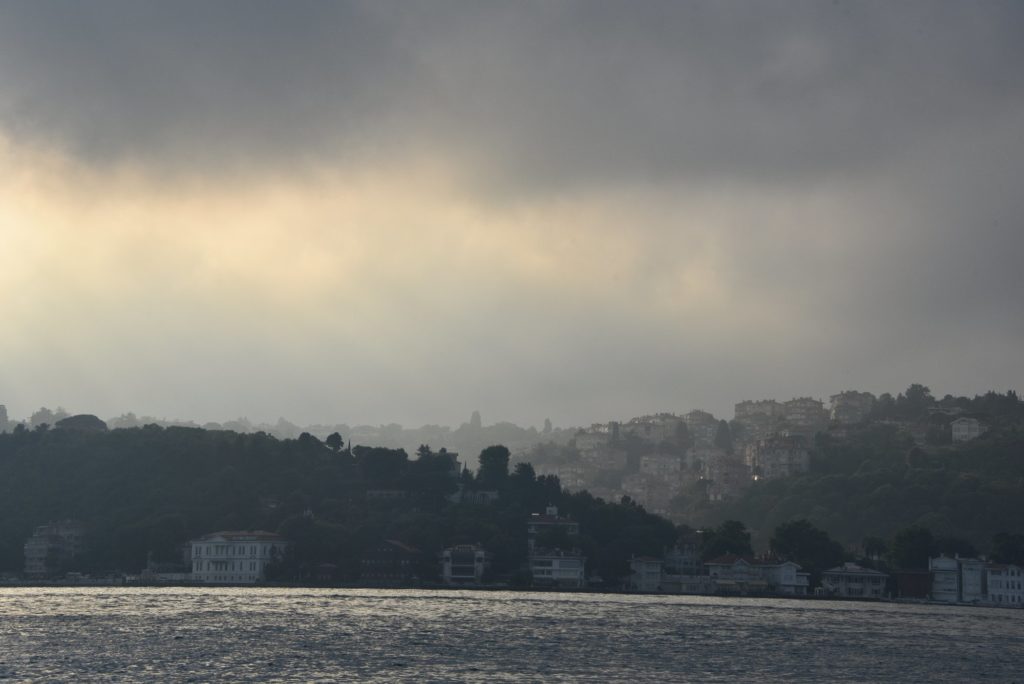 Today was the day to be tourists in the old city. First up was Hagia Sophia (pronounced Aya Sofia here), the towering monument to religion constructed by the Byzantine Emperor Justinian in 537AD.  It was a Greek Orthodox church back then, and many mosaics and symbols of Christianity are still visible inside the building. With the conquering of Constantinople (Istanbul) by the Ottoman Empire in 1453, out went Christianity and Aya Sofia was converted into a mosque. It remained a place of active worship until the 1930’s, when it was opened to the public as a museum. 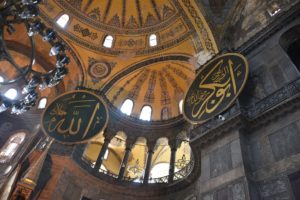 Notice the massive calligraphic panels (recent additions), with the names of Allah, Muhammad and other important Islamic characters.

Across the way is the Blue Mosque, a towering building with a distinctive red carpet that is still actively used as a place of worship. 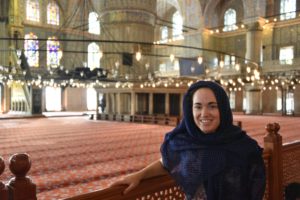 Men still kneel on the red carpet to pray at the Blue Mosque today. Lauren had to cover up to go inside!

In desperate need of snacks after only simit for breakfast, we searched the Hippodrome (a circus and chariot racing pavilion in the times of Constantinople) for some street food. Luckily a vendor selling freshly roasted chestnuts and corn was more than happy to oblige. We took a trip through the Grand Bazzar after, one of the oldest covered markets still in operation today. We stopped to peruse the hand-made silk rugs, gasp at the gold salesman and sample Turkish delight from vendors eager to take our Lira. 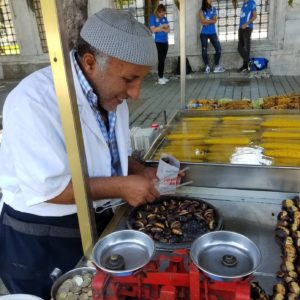 Service with a smile! I think we were his first customers of the day. 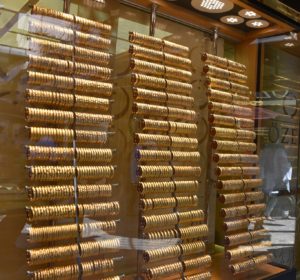 Wearing your wealth on your sleeve is a thing here.

Afterwards, we toured Topkapı Palace, where Ottoman Sultans lived and ruled from the 15th century onward. Most interesting was the Harem, the private quarters of the Sultan and his family. The Sultan’s mother (Queen Mother) had a ton of power back then! She dictated which women could be part of the Harem, and actually had a room between the Sultan and his wives (no doubt to keep tabs on their comings and goings). 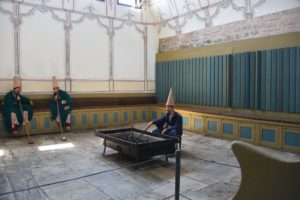 Only the Sultans family and servants were allowed inside. A palace within the palace. 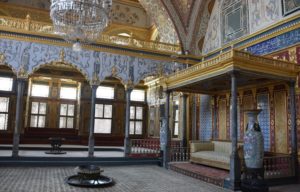 Imperial hall of the Harem.

Finally, we had to try a Turkish bath (hamam). Baths have been a staple of Istanbul’s culture since the 16th century. Walk into the bath room wearing only a towel. Çemberlitaş Hamam is one of the oldest and the obvious choice. Lay down on the hot marble slab and wait 15 minutes for your skin to soften. When your masseuse enters, roll over and try to convince yourself it’s fun as they scrape your body of its outer layers with what is basically a brillo pad. Enjoy a hot massage and soap bath following, and end with a cold shower. Wow. 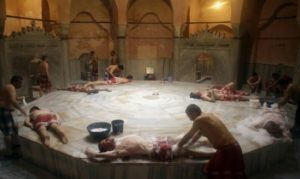 You will be scrubbed clean of every single dead skin cell while laying on a marble slab from 1584. Source

Tired, but cleaner than we’ve been in days, we rode back up the Bosphorus in another commuter boat. 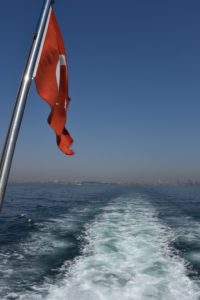